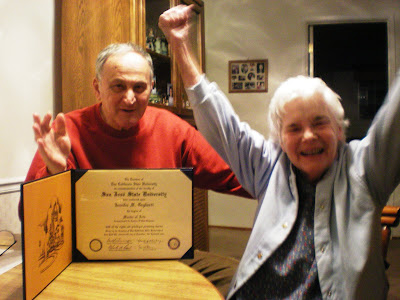 On Tuesday, December 20, 2011, my mother passed away after a long illness. SATVerbalPrep will resume its regular schedule in the new year. Thank you.
Posted by US Citizenship Podcast at 12:01 AM No comments:

For years, many Asian-Americans have been convinced that it's harder for them to gain admission to the nation's top colleges.

Studies show that Asian-Americans meet these colleges' admissions standards far out of proportion to their 6 percent representation in the U.S. population, and that they often need test scores hundreds of points higher than applicants from other ethnic groups to have an equal chance of admission. Critics say these numbers, along with the fact that some top colleges with race-blind admissions have double the Asian percentage of Ivy League schools, prove the existence of discrimination.

The way it works, the critics believe, is that Asian-Americans are evaluated not as individuals, but against the thousands of other ultra-achieving Asians. (read more)
Posted by US Citizenship Podcast at 12:01 AM No comments:

Debate on whether cursive writing should still be taught

Debate on whether cursive writing should still be taught Liz Bowie, Baltimore Sun via SJMercury.com

Cursive is not included in the so-called common core standards, which will govern teaching and lesson plans in 46 states beginning next year, leaving states free to shift away from a subject taught for centuries. Hawaii and Indiana have already dropped it.

With technology pervasive in society and fewer documents that need a cursive signature, some educators say there is no need to bother kids with the tedious, time-consuming lessons on cursive. They argue that we soon may no longer need to sign our names on legal documents or credit card receipts; a scan of our eyeballs or a thumbprint may be all that is needed to identify us.

But there's more than just necessity that should be considered, historians say. (read more)
Posted by US Citizenship Podcast at 12:01 AM No comments:

For her design of a cancer-fighting technique that targets tumors and leaves healthy tissue intact, 17-year-old Angela Zhang of Cupertino has won the national Siemens Competition in Math Science and Technology and a $100,000 scholarship.
Posted by US Citizenship Podcast at 12:01 AM No comments:

Vice President Joe Biden and Secretary of Education Arne Duncan visit Duncan Fletcher High School in Neptune Beach, Florida to discuss the steps the administration has taken to make college more affordable and the need for Colleges to keep costs lower so the next generation of Americans can outcompete the rest of the world.
Posted by US Citizenship Podcast at 12:01 AM No comments:

Sites have grown exponentially, helped by hordes of grateful parents whose dim memories of algebra or trigonometry are not enough to help with their children's homework.
'Cheating' Caught on Film Shakes U.K. Exams System
Posted by US Citizenship Podcast at 6:59 PM No comments:

Champions of Change: Girls and Women in STEM

Champions of Change: Girls and Women in STEM

Promote Your Page Too

Grammar: The Fist of No-Error